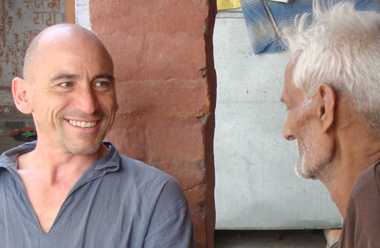 Denis grew up in a sociable family, in a house with open doors. In 1997, he went to India where he spent seven years. His quest for beauty and deeper meaning brought him to study classical Indian music under the guidance of Sri Parashuram Pandey. After several long solitary periods in a little house in the Himalayas, Denis met teachers who inspired him, such as Christopher Titmuss, Jaya Ashmore and Ajay Singh. Since 2006, he has been teaching in Spain, France, Holland, Austria and India.

His approach to meditation, based on our capacity to observe, is simple and avoids any belief system. His practical path, neither extravagant nor complex, invites our honest and open exploration. He teaches us to pause our daily routine and to observe ourselves calmly and without judgment. His simple approach develops our self awareness, self knowledge and the ability just to be.

He is a teacher of the Dharma Nature association, and seeks to simplify the approach to meditation to make it more accessible and integrated into daily life.

“Self knowledge is not an accumulation of knowledge about ourselves, but rather a capacity to be with oneself.”

Most of Denis’ teachings are offered on a donation based system. If you appreciate this method and wish to support him your financial contribution will be very much appreciated.

Here is a dharma talk that Denis gave at the annual Dharma Yatra in August, 2013.

Here is an audio-only recording of Indian classical music that Denis made with friends in Varanasi, India, in 2008.

If you wish to receive our newsletter, leave your e-mail here.

If you have any problem subscribing, email publicdave+mailchimp@gmail.com, and we’ll add you manually